Now reading: Wake, Siren by Nina MacLaughlin Now watching: What We Do in the Shadows Next event: NYCC 2022?
0 comment

I saw Avengers: Age of Ultron a little early thanks to the fine folks over at Allied Hispanic and instantly posted a video of my first reactions, because that’s a thing normal people do. Now that I’ve had some time to sit and think about the film, however, I want to offer a more comprehensive breakdown and adjust my initial rating!

So, Marvel comic fans will know that Ultron was originally the crazy silver baby of Hank Pym. Take that knowledge and shelve it, because Ultron’s origins in the movie have nothing to do with Hank Pym. In fact, Mr. Shrinkydink isn’t even name dropped. While that may anger purists, it actually makes sense for simplicity’s sake. After all, Hank is best summed up as a technological genius, and that role in the Marvel Cinematic Universe has already been filled since Iron Man.

That’s right! In the film, Ultron is actually the crazy silver baby of Tony Stark (with help from Bruce Banner). Tony’s purpose in creating the AI is noble, but things obviously don’t go as planned. In fact, they go pretty much exactly counter to as planned, resulting in yet another potentially world-ending catastrophe that the Avengers must face together. And face it they do, despite a number of squabbles within the team. Heck, they even manage to bring a few new faces into the fold by the end of the whole ordeal.

As I mentioned in the video above, this was a thoroughly enjoyable movie to watch in the theater. Action-packed and full of new characters, it’s a great installment to the franchise on fun factor alone. Hawkeye finally– finally!— got his day, with a full-fledged backstory and actual dialogue that, y’know, mattered. His history served to move the plot along, and although it felt jarring and perhaps forced at first, it was truly charming. It can sometimes be hard to relate to larger-than-life characters such as Thor, Captain America and Iron Man, who all have talents that make them seem untouchable or inaccessible to the average person. Hawkeye comes to represent the most normal of the group, not only because of his skill set but also because of what are revealed to be sincerely down-to-earth motivations. Knowing that he can contribute significantly as a part of the team is grounding, and seeing how he grows and bonds with other characters (especially Natasha) brings a touch of reality to an otherwise fantastical film.

More than Hawkeye, however, my Favorite Character Award goes to Purple Jesus– I mean, Vision. I enjoy that the film mirrored his origins in the comics while giving his “birth” a distinct twist just for the screen. I was also pleased to finally see Paul Bettany take a physical role in the MCU. He excelled at striking the balance between stiff robot and burgeoning humanity that essentially makes up an android like Vision. Plus, he looked pretty fly in all that purple makeup.

By the way, my Favorite Scene Award goes to Klaw’s appearance and interaction with Ultron. Andy Serkis is a spectacularly gifted actor who nails a South African accent like nobody’s business. I’ll never not be impressed by his portrayals, even of slimy Marvel baddies.

Oh, and the music! Music is something I usually overlook while watching a movie, but this time I found myself really noticing it in the theater. It set up scenes well, especially those involving Ultron, in which a sinister twang took over and emphasized his role as the antagonist.

Speaking of Ultron as the antagonist, my biggest complaint about the second Avengers is that he makes a poor one. Ultron wasn’t dedicated enough to the villainous persona, with his humor crossing the line from amusing to overkill pretty early on. Look, I get it: he’s supposed to be Tony’s twisted reflection or bitter pseudo-son. Still, for all his complaints about humanity and claims to being far higher on the evolutionary ladder, that dry humor betrayed him as a fundamentally human quality. His constant thirst for attention and approval are also human qualities that contradict his arrogant facade. Some would call this contradiction a clever irony, but to me it just made him seem like a petulant child in a robot suit. On top of it all, Spader’s acting mannerisms shone through a little too clearly and broke the illusion while watching. Ultron wasn’t nearly as terrifying as the trailers made him out to be, nor did he generate empathy from the audience like, say, Loki did. All I felt was a burning desire to tell him to sit in a corner.

Now, Raina talks about “consequences” at the end of an Agents of SHIELD tie-in episode, and I appreciated that bit because it rang true. Much like the reveal of Tony’s PTSD in Iron Man 3, we could see the outcome of the Avengers’ actions in Age of Ultron, both in how the Avengers affected each other and the world at large. Alliances were tested and strained, secrets were unearthed, etc. Unfortunately, at the very end, events seemed entirely rushed. In Netflix’s Daredevil, viewers could actually see the aftermath of Avengers in New York City– the damage to neighborhoods, for example, and the time and effort required to rebuild. At the end of Age of Ultron, however, the physical consequences of the Avengers’ impressive but highly destructive battles are completely glossed over.

As for the twins, two of the most highly anticipated aspects of the film… They didn’t feel genuine, perhaps because of limited screen time or just poor execution, and Wanda’s powers were severely underutilized. The dream-like sequences she instigated should have been powerful and traumatic, but instead they came off as confusing and frankly useless.

Well, perhaps not entirely useless. They did get Thor to take off his shirt and jump in some water.

Also, Natasha? No, thanks. I won’t go into detail about her characterization because a million and one outlets have already covered it, but I’ll admit that I was disappointed by the direction she took.

A solid 7/10 in my book, adjusting down from the 8/10 I awarded Age of Ultron in the video above. After seeing it twice, I feel the plot wasn’t quite as tight as I’d hoped, with Ultron’s motives and behavior ultimately coming off as lackluster. Still, I absolutely recommend watching it, because it’s downright fun and sets up a whole lot for the future of the Marvel Cinematic Universe.

WHAT ABOUT THE NEXT INSTALLMENT?

Let’s be honest: Captain America: Civil War is basically slated as the next Avengers. The tension between Tony and Steve is already very real and steadily brewing; the only thing stopping it from boiling over in Age of Ultron was Thor, who solved the pair’s problem and put their tiff on the back burner. Obviously that Asgardian bandaid isn’t a permanent fix, and boy am I looking forward to seeing how that inevitable failure plays out. I’m also curious about the team’s many changes by the end of Age of Ultron and what they mean for the Avengers moving forward. Nothing in this universe ever really stays dead, including alliances.

You know that lady in the cave from the second trailer? The one everyone speculated was actually a Wakandan and therefore leading into an appearance by Black Panther?

Yeah, she doesn’t actually show up in the movie. She’s an extra, not a Wakandan. Though if you’re a Black Panther fan, there are enough references in Age of Ultron that you may want to watch it anyway.

Attack on Titan: Escape from the Walled City

REVIEW: X-Men: Days of Future Past 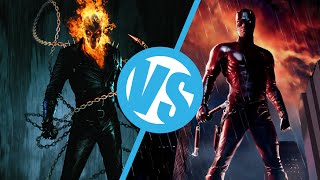 Daredevil VS Ghost Rider: Which is Worse?

No images found!
Try some other hashtag or username